I admire Hans Hartung... I envy the painter for his visualisations, the concretisation of ideas or passions, the dramatic complexity that expresses itself, and above all, the fact of capturing an immense universe onto a reduced surface. 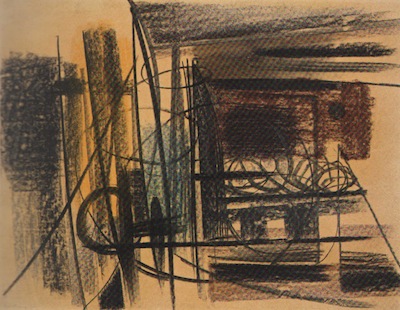 Oh over there, a pastel by Hartung in beige, on a soft background, the Prussian blues, sanguine, golden yellow! The sensuality of the delicate powder on a butterfly's wing, tamed onto a yellow ochre paper support, "raisin" format, pasted onto canvas. The flat tints softened by curtains of shadows, laid onto the support with a pastel stick, quickly brushing over them and then suddenly stopping dead. The wind blowing in the sails! Moments of rhythm, fury, impulsion, these passages imbued with exaltation!

The superposition of pastel is limited to two layers; beyond this and the unfixed pastel would become cloudy! Left unworked, the pigment reveals the softness of its substance.

Then, a constant motif in Hartung's work, sequences of loops coil up like scrolls between two thicknesses of carefully-dosed pastel. Another recurring element in his work, the circle, the watching eye, the camera objective...

And in the shifting spirals, a vision of a modern industrial world, mechanical, in motion! In this composition, there are also the principles of construction taken from Geometric Abstraction and used for example by Nicolas de Staël, painter/builder of "architectured" assemblages.

Here, we find ourselves at the very source of Hartung's language, where the essential is in the gestures of emotion. In one of my schoolbooks, I used to catch the thunderbolts as soon as they appeared. I had to have finished drawing the zigzags before the thunder clap. Thus, I would ward off the lightning!

In this art form, nothing limits the gaze, nothing familiar is shown, just a certain spontaneity reinforcing the speed of the moment, extended to the geometric shapes in space where the gaze drifts over the tangents, mirrored by the resonance of spirals; its movements, like dance movements, open the way for escape, allow us to get a glimpse of infinity...

The work of Hans Hartung is specifically based on line. The artist has a skilful mastery of lines, strengthened by the techniques he loves: pencil drawing, pastel, copper engraving, lithography... Pastels being a favourite with him for their speed of execution, the cost compared to oils, their function as a potential model of transposition onto the canvas. 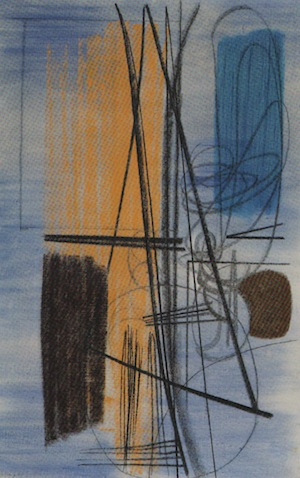 Gushing and yet restrained! On the modulated background that brushes the very surface of the weave with atmospheric and earthly flat tints, ghostlike interlacing rises up in clouds, a turquoise mass is balanced out by a brown one, whilst in-between the two, a large authoritative triangle structures the landscape.

The shape of a sailboat on the diagonal, the triangle stabilised on its base, has it been pierced in the middle by a projectile coming from the sky or a big diving fish? Could the isosceles triangle be an unconscious projection of the artist's dream of equilibrium, following the amputation of his leg?

The base of the triangle rests on a thin circle, sliced in half and quarter moons in movement and full of lightning flashes! - cf. the artist's love of astronomy and photography - Hartung doesn't break with the traditional rules of composition. His works are constructed from a certain self-confidence and rigorousness and their abstract nature allows the spectators to develop their own individual thought process. 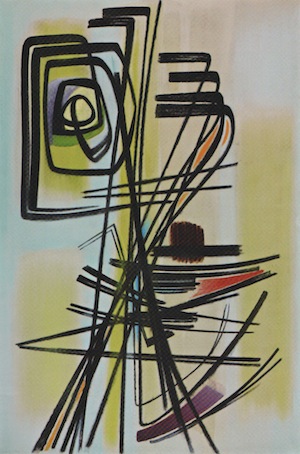 Here is another painting by the artist that looks like a drawing. On a canvas support with flat tints of gentle tonalities worked in soft oil, a bundle of sharp lines that cross each other dominates the centre of the work. The clinking of the oblique, horizontal and self-assured lines drawn with an iron hand, recall a confrontation, a battle, a grinding machine.

At the top of this bouquet of forks, a kind of hieratic face, threatened, emerges from the conflict. Its powerful geometry recalls the dynamic facets Picasso used in his portraits. The figure, appears to be looking both ahead and in the rear mirror of his tractor!

We can feel the jerking electric rhythms, flashing with colours, we can hear the swaying of the scythes cutting through the grass. Are the zigzags, the dominant yellow, the resurgence of Hartung's passion for thunder bolts, and this stiffness of execution and forked line, a warlike violence? 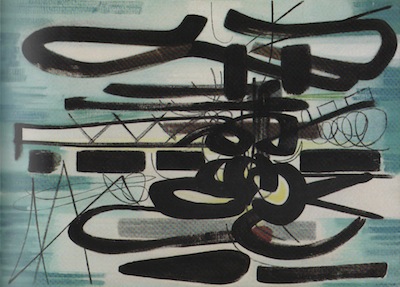 This very specific painting made up of predominantly horizontal lines, pagoda style, brings an end to the cycle of Hartung’s work that we have been looking at.

The sinuous arabesques resemble calligraphic lines painted with a square-tipped brush, choreographed by the dancing movements of the artist’s wrist. The texture of the weaker lines of black paint, allows the vibrations of the very substance of the canvas’ grain to show through.

After the fire of the precedent painting, here the black lines appear to be gliding upon the water! On the white-primed canvas support, barely enhanced around the sides of the sea green flat tints that fade away into a mist of invisibility, the violence of a black knot explodes at the centre of the brightness.

Rigid rectangles like train carriages pummel the edifice. A kind of clerestory bridge traverses adversity and a train derails among the barbed wire of fine lines! A crescent moon retreats into the night whilst a dark purple sun appears to rise...

A tightrope walker, Hartung conjugates stability and equilibrium, solid black lines with spider-like meanderings. And always in his introverted and spiritual work, the lyricism of a compulsive rhythm and musical sensibility.