I translate the emotion I feel when I'm faced with a landscape… It is not my desire that intervenes but the emotion that takes over me. 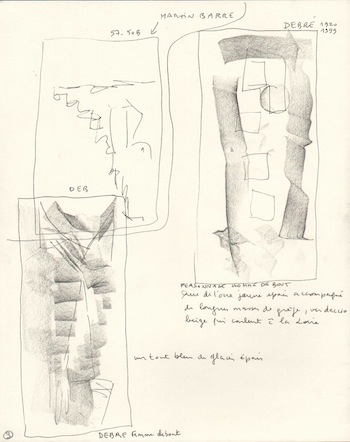 Notes taken by Marie-Lydie Joffre on the work of Olivier Debré.

At the top left, a sketch of an oil by Martin Barré.

Femme debout forms a pair with Personnage, Homme debout. The two paintings were shown at the Musée Fabre in Montpellier, from December 2011 to March 2012, within the framework of "Les sujets de l'abstraction" exhibition.

Olivier Debré trained as an architect. His vocation as an artist was fired by his encounters with artists from the Lyrical Abstraction movement and also Picasso. Following the traumatisms of two world wars, he found a new energy, thanks to his faith in humanity and nature.

Femme debout, an oil on canvas by Olivier Debré, belongs to the Signes-Personnages series.

Incised in bas-reliefs with geometric forms, this is a cerebral work. A woman standing or reclining? A Picasso-type mask? Marshes seen from the sky? A skyscraper?

The verticality of the format suggests the rising spirituality of humanity following the tragedies of these two world wars. The form, crisscrossed by a geometry of triangulation, is made up of compacted sediment, shaded by a clay-coloured camaïeu; earthy tones varnished with glazes, bluish with chilblains, outlined by the muted tonalities of narrow silty ditches. Hieratic marionette, mummified with strips, ironed out like the translucent folds of a child's first communion dress.

The painting is nourished with thick rough paint similar to the style of the "painter-builders", contemporaries of the artist, such as Nicolas de Staël whose harmonies catch the fire of colours, whilst Olivier Debré's impastos look towards a monochrome palette, combined with the softness of different nuances.

Composition structured with compartmentalized plots, rigid, constructed with a knife and brush, smoothed over with a thick glaze.       Footbridges, dikes and jetties, staircase ladders, architectured like the notes on a piano or a xylophone keyboard, perfected with patience, forming the motionless decor of a building block set, an observation platform.

Femme debout is the evocation of a female form from the waist down. Belly emerging from a lunar lake, encircled by a dam in the form of a bird's wing. Pubis marbled by a clump of kelp. Enamelled petrol blue pontoons restrain the opaline clarity of the belly in gestation preparing for works to come, that will be light smooth spacious, marked with embossed signatures, following on from the mass of matter floating on the waters of the basin.

The belly and thighs caparisoned in railway track perspectives, edged with steep cliffs, an invitation to travel. We follow the slatted floor to go across the elements on never-ending tracks.

Edging the knees of the Femme debout, there is a one-man band! Metaphor of the painter- architect? He is carrying the woman on his shoulders and appears to point the way for the works to come, Signes-Paysages...

From the 1960s on, Olivier Debré's painting went from cogitation to letting go, and in this way changed both in structure and texture. From that point on the artist painted "sur le motif", in tune with the atmospheric sensibility of nature, and in particular the capriciousness of the Loire.

Over time the works blossomed into monumental formats. A journey to the heart of emotional colour that had become the artist's language, the fluidity of luminous monochromes undulating with brightness, carrying us away on the waves of draperies and curtains of the imaginary stage... 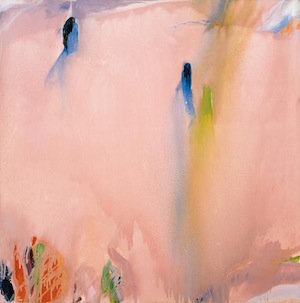 Comments on the works of famous artists